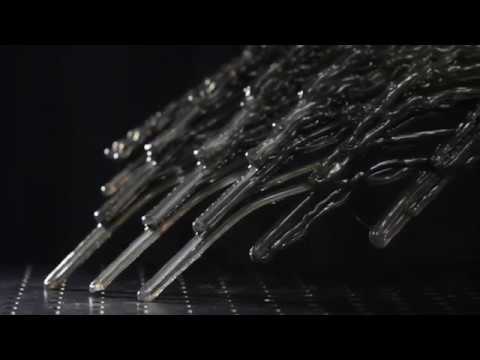 Mountain goats are considered to be among the best climbing mammals. Their slim profile combined with their supple split hoof allows the animal to center its weight and find footholds on minimal surface area. However. the goat faces great danger from loss of sight/balance, and must take extremely long winding horizontal paths up and down mountain sides. What if the mountain goat was able to increase its grip on the rock wall, as well as take a more efficient vertical path? The leg of the mountain goat was redesigned based on conceptual inspiration from the legs of many insects. Insect’s legs feature many sharp spikes that allow gripping on surfaces that yield little to no foothold. With this in mind, the new prosthetic for the goat would no longer focus on arduous horizontal climbing that relies on flexible joints, but instead, would rely on increased surface area built from highly articulated spiked components. The final Capra Articula prosthetic eliminates the standard knee and hoof in favor of the insect-like spiked surface. The excess of sharp spines ensures multiple contact points, each of which can now be greatly reduced in size. Using the high shoulder blade like articulation, the goat is able scale vertical cliff sides, eliminating the need for exhaustive